What is a heat-only boiler?

A heat-only boiler is a unit that does exactly what its name implies. It only creates heat. Now, I know you’re thinking all boilers create heat, don’t they? Well yes, they do. But heat only boilers don’t do anything other than creating heat. Heat only boilers have no moving parts. Whereas other boilers like combi boilers and system boilers have all the moving parts on the inside.

Heat only boilers have all their moving parts external to the boiler. The main two parts are the pump and the zone valves/three-way valves. Also, unlike combi boilers, heat only boilers usually work in conjunction with a hot water cylinder to provide hot water.

How do heat only boilers work?

Aside from the pump and zone valves. Generally, conventional boilers work in conjunction with a hot water cylinder and two feed tanks. Known as a gravity-fed system. The hot water cylinder provides the hot water and the two tanks provide cold water to the system when it needs it. The tanks have to be positioned at the highest point in the system. Usually above the cylinder or in the loft. They use gravity to pull the water down into the system, hence the name ‘gravity fed’.
When there is a call for heat, whether it be for heating or hot water. The pump runs, then, in turn, fires up the boiler. The water is heated by the boiler, then circulated by the pump. To give the choice between heating and hot water the system uses either zone valves (S Plan) or a three-way valve (Y plan). These allow the water to circulate around the hot water cylinder or the central heating. Or both. The hot water cylinder is heated indirectly through a coil inside the cylinder.
Central heating water is pumped around the coil and heats up the water around it. The heated water then subsequently rises then the colder water below it is heated up too. Using a cylinder stat the hot water continues to heat up until the desired temperature is reached usually 60°. The cylinder stat shuts the boiler off once the desired temperature has been reached. Exactly the same way a thermostatic room stat does with the heating. Some older boilers use gravity circulation to heat up the cylinder. This works by the hot water rising from the boiler to the cylinder and creating circulation.

Along with feeding water to the system, the two tanks also provide expansion. both tanks have pipes that drop into the top of them. These tanks are expansion relief incase the water ever expands too much. The water expands op the pipes then spit the excess water into the tanks. This stops the pressure from getting too high and causing joints to leak. If the pressure gets too high in the cylinder it can cause leaks or even explode. But, is something that is rarely seen in the UK.
Due to the system being fed by gravity both the hot water and central heating are generally very low pressure. A lot of households add shower pumps onto the hot water so it provides more powerful showers. 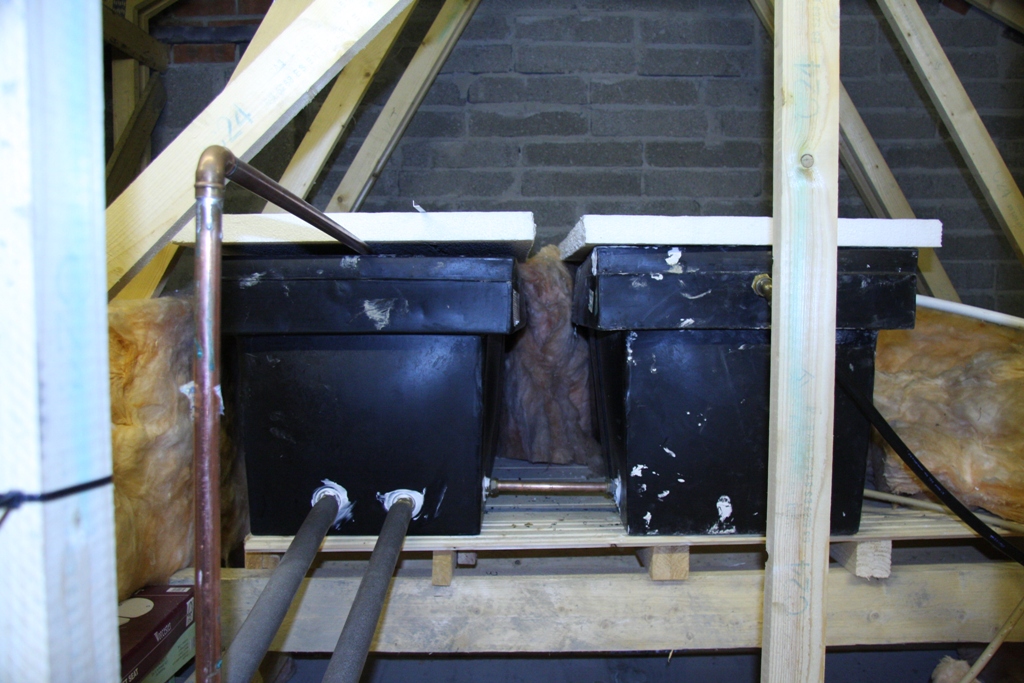 Some gravity-fed systems have what is known as a primatic cylinder. These systems only have one tank. And, separate the central heating and hot water through an air bubble in the tank. These sounded like a great idea at the time due to the extra space they saved. But, became problematic. Loss of the air bubble would result in stagnant central heating water being mixed with clean hot water. Not a good mix, people would find dirty brown water coming out of their taps and showers. If it was drunk, this water would make someone ill. And, obviously, nobody would want to shower in it! Due to it being stagnant central heating water usually has a foul smell to it, along with the dirty brown colour.

Heat only boilers can be used alongside an unvented cylinder to provide better hot water pressure. But, generally, they’re found with gravity fed hot water tanks. Although they have their advantages, they have a lot of disadvantages. Most heat-only boiler installations are direct replacements. Where the installation of a combi boiler isn’t feasible. If you have a very old boiler that is floor standing or on a kitchen wall. It is most likely going to be a heat-only boiler.

What’s the difference between a combi boiler and a heat-only boiler?

What’s the difference between a system boiler and a heat-only boiler?

System boilers work in a similar way to regular boilers, heating up a cylinder indirectly via a coil. But there are a few fundamental differences. Unlike regular boilers, systems boilers have the pump inside the unit.

Also, system boilers work on a pressurised system instead of a gravity-fed system. So instead of having a feed and expansion tank in the loft, they have an expansion vessel inside the boiler that deals with expansion. Also, water has to be entered manually through a filling loop.

Can provide lots of hot water

Due to heat only boilers storing hot water in the cylinder, they can provide vast amounts of hot water at a good temperature. Making them suitable for homes with large hot water demand. They are more than capable of providing two showers with hot water. Although it may be at a low pressure if not in conjunction with a shower pump. 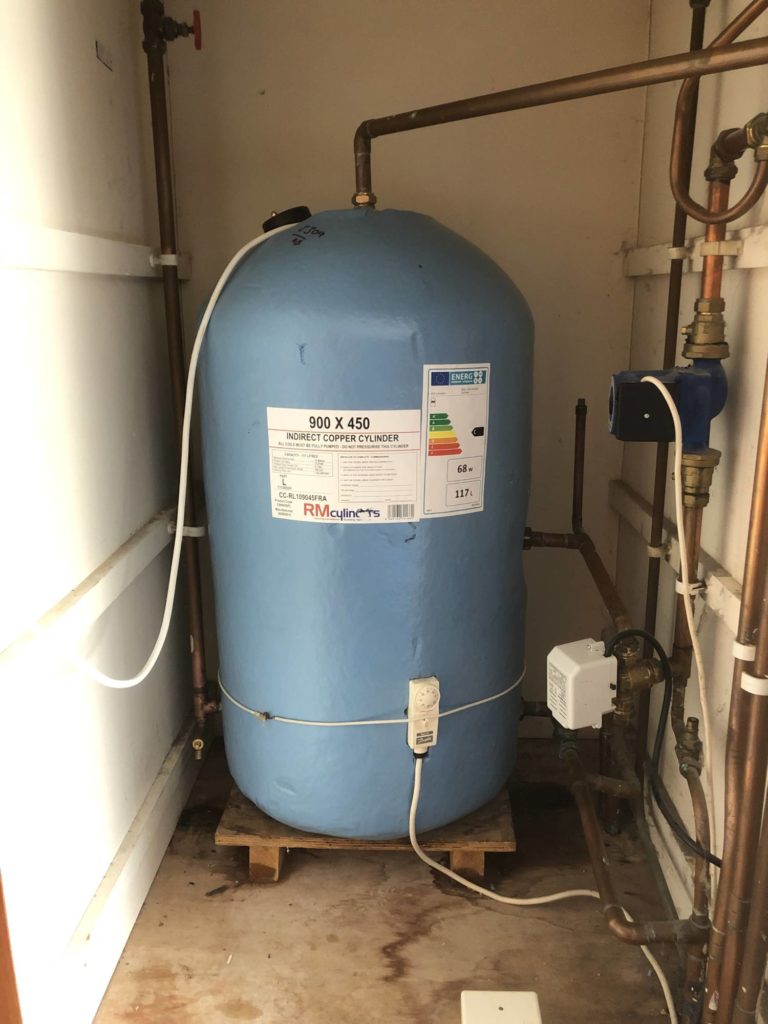 Hot water back up

An immersion heater is an element that goes inside the cylinder and heats it up. Much like the element found in a kettle, albeit much bigger. Due to the immersion, the cylinder can be heated without the boiler. So if the boiler breaks hot water is still available.

Heat only boilers have very few parts inside. Added to the external parts like the pump and zone valves, this makes problems relatively easy to diagnose. Unlike combi boilers, there isn’t much that can go wrong with a heat-only boiler system.

When it comes to replacing an old heat only boiler it is a relatively easy job. Due to it being a straight swap, generally, there won’t be very much upheaval caused to the home. Another benefit to this is the installation costs are considerably less than converting the system to a combi system.

Only need a small output

Because heat only boilers provide hot water indirectly instead of directly like a combi boiler. They don’t have to work as hard, and as a result, don’t need a high kW output. The average 3 bedroom home in the UK would need a 25-30kW combi boiler, if this home had a heat-only boiler it would probably only need 15-20kW. As a result, buying heat only boilers is generally much cheaper than buying combi boilers.

Due to heat only boiler systems being gravity fed, the water pressure from the cylinder is generally poor. Unless you have mains fed electric showers or a shower pump the flow rate from a shower will be very low.

Takes a lot of space

With heat only boilers needing a cylinder and two cold water tanks, alongside the boiler. They take up a lot of space, especially the cylinder. Usually found in airing cupboards in the bathroom or next to a bedroom their cupboards take up valuable space. In my own heating company, our customers have removed the airing cupboards to create bigger bathrooms or bedrooms once the cylinder has been removed. In a small house, this can make a big difference in how a bedroom or bathroom feels.

Warranty only applies to the boiler

Due to most of the parts being external. The boilers warranty doesn’t cover them. Meaning when things start to go wrong it can get expensive. A new pump or zone valve replacement can cost between £120-£200 so it’s not pocket change.

Not as efficient as combi boilers

Most only heat only boilers are about 60% efficient. Which means for every £1 you spend running it you only the equivalent of 60p’s worth of heat from it. Modern regular boilers are much more efficient. All modern boilers have to be at least 90% efficient. But that doesn’t take into account the cylinder. Generally poorly insulated, gravity-fed cylinder tend to lose a lot of heat.

Ever noticed how warm airing cupboards are? That warmth comes from heat lost from the cylinder. Due to the heat lost, the boiler has to work harder to keep the cylinder warm. And, as a result, costs you more on your energy bill.

Hot water can run out

If a cylinder is undersized, or if a home uses a lot of hot water. Usually ones with teenagers or kids that have long showers or baths. The hot water can run out completely. This leaves you with an unwanted wait for the cylinder to warm up. Not ideal after a long day at work when you’re desperate for a shower.

Constantly filled with aerated water, due to them being gravity fed. The water inside reacts with the steel from the radiators, causing sludge. Aerated water accelerates the corrosion. This means gravity-fed systems deteriorate much faster than the sealed systems used with combi and system boilers. The sludge formed from the corrosion blocks up pipework and can stop entire sections of the system from working. Along with clogging up moving parts like the pump and zone valves. Furthermore, the corrosion can begin to attack the radiators causing small leaks.

Heat only boiler systems are prone to airlocks. Usually caused by leaks or aerated water in the system. Air can get stuck in radiators, pipework or the pump, stopping them from working correctly. Cold spots at the top of radiators are usually caused by air. Released easily through the bleed, this isn’t a big job.

But, airlocks in pipework can be much more difficult to remove. This can be difficult and very time-consuming, as working radiators have to be turned off. Forcing the air to move to a point where it can be released.

When buying a house, the majority of people look for combi boilers. People see combi boilers as modern and efficient. Unlike their traditional counterparts. Most buyers would see replacing a heat-only boiler as an additional expense they will have to factor into their budget. Which is always offputting.

We hope this guide has helped you understand what a heat-only boiler is and how they work. As well as showing you all the advantages and disadvantages. Regular boilers were a great invention back in the day. But now compared to the more modern combi and system boilers they are largely inferior. If you have any questions regarding heat only boilers or if you feel that we have missed anything out let us know at – info@heatingbritain.com.